Overview
It was six years ago that the Carpatho-Rusyn Society (C-RS) purchased the former St. John’s Byzantine Catholic Cathedral to create a museum and educational center for the promotion of our culture.  It had been built in 1903 exclusively for Rusyn immigrants.  When our ancestors came to America, they had nothing.  They worked very hard so that their descendants would have a better life.  They also cared for the homeland they left behind.  That’s why, on July 23, 1918, Rusyn-American leaders met at our center.   There they recommended that Podkarpatska Rus join the newly established republic of Czechoslovakia.  This was so the people they had left behind would enjoy the freedom and autonomy promised by President Wilson in his famous 14 points of self- determination.
What was wrong and what we did
By the time the C-RS acquired the building, it had been vacant for 11 years and was in need of an extreme makeover.
Exterior
The roof leaked badly, and although the pigeons seemed to enjoy the easy access, it was hardly a fit habitat for humanity.   Old large rusty air conditioning units on the roof needed to be removed.  The gutters were rotted providing an inviting entrance for the pigeons.  The chimney was on the verge to collapse.  The connecting roof between our center and the next door neighbor’s house was a potential fire hazard.  The entire building was in dire need of a coat of paint.   Actually, it needed many coats of paint.

Interior
Inside the building the mold was so bad that one could not stay there for any length of time.   The mold and mildew were painfully visible to the naked eye.  The paint was peeling off the interior walls, at least in those places where the walls still had plaster.  There were leaking pipes. After a major water break a few winters ago, our opportunistic mold came to more closely resemble a rain forest.  We hadn’t meant to go quite this green.
How we did it
After the initial excitement of obtaining the building, the realization of the humongous amount of work required set in.  Where should we start?  Where would the funds come from?  So the first two years were spent discussing how to begin.
The first priority was to evict our feathered guests.   We blocked off their access points.  The shrubs, moss and debris from the roof were removed and holes patched.
We next removed the old air conditioning units. The  section of roof connected with the neighbor’s house was removed.   The gutters were fixed, the chimney repaired.
Inside, the damaged inner walls were replastered and painted. 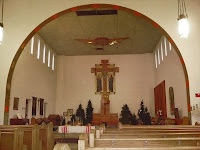 The deteriorating canvas wall paintings were peeled away and stored for possible restoration.  The debris left by the previous tenants and damage caused by water leaks were removed.  The leaking pipes were repaired.   Additional photos will soon be posted on our facebook.


More of this story will be forthcoming in my next installment.
Posted by Maryann at 8:48 PM