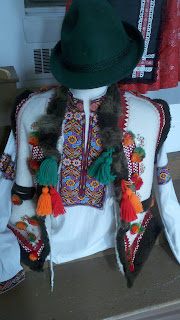 Though a small area roughly  the  size of West Virginia, the Carpatho-Rusyn homeland, known as Carpatho-Rus’, boasts a wide variety of folk costumes. In Carpatho Rus’, almost every village has its own unique costume style, embroidery patterns and use of colors.

While costumes can be a reflection of influences from other cultures in a border territory like Carpatho-Rus’, the greatest determinant of costume is geography.  What the area is like in which one lives heavily influences  how one dresses – what materials are available locally, what is one’s concept of personal space and what the weather is like. 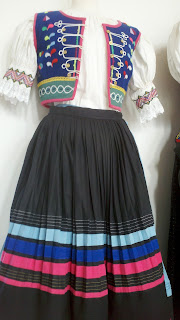 Let’s first talk about other influences. For instance, among the Carpatho-Rusyns,  those living in Spish and upper Sharysh Counties (today in Slovakia) lived alongside German immigrants who came to mine  the area and make glass. They brought with them lace making, brocade and the batik process for putting patterns in cloth. All of these are used in some of the Rusyn costumes of those regions.

Now let’s discuss weather. Rusyn who lived in the high mountains needed warmer clothing than those in the lowlands around  Kosice, Trebisov and Michalovce(all today in Slovakia). The lowlanders  grew flax and made much of their clothing from its refinement – linen. Highlanders relied on wool as a clothing staple- based upon the need to stay warm. 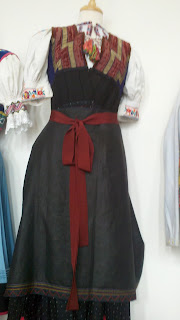 A key determinant in not only choice of fabric but also style of clothing and color was topography. Among the Carpatho-Rusyns, those living in the lowlands of the Danubian Basin (today Slovakia, Hungary and the very southwest  tip of Ukraine), have wide and open costumes. Men have wide bodied shirts with wide sleeves and wide, fringed pant legs. Women have broad skirts with large pleats. Color in these areas includes a wide array, with a lot of use of red, blue, purple and black.
For Rusyns living in the high Carpathian Mountains in the East (today in Ukraine) where there is little room and therefore , the concept of little personal space(the space right around you), costuming cuts close to the body. Women’s skirts are tight and unpleated. Sleeves are long, tighter fitting, and the neck of the blouse is close and high. A woman’s costume is without frills. It is beautiful but practical in a place where it is harder to grow flax for linen and where sheep’s wool is the least expensive and most plentiful clothing material. Men’s costumes are likewise close fitting and mostly made of wool. The colors that predominate here are much earthier – red, orange, brown and green. 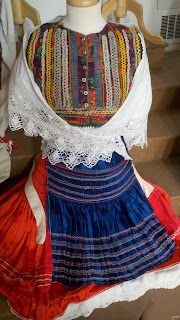 Perhaps the most characteristic feature of Carpatho-Rusyn folk costumes is their embroidery. Regardless of village, every Rusyn folk costume sports some type of embroidery as its ornamentation, with particular patterns used in particular regions. These patterns were not chosen by Rusyn peasants as something “pretty” to adorn their clothing. They are ancient mystical patterns which , like Amish hex signs, were meant to ward off evil or assure the wearer certain things –a bountiful harvest, good health, or a host of children!   One familiar with Rusyn embroidery can look at the pattern on a man’s shirt or the trim of a woman’s skirt and know what region or county within Carpatho-Rus’ the costume comes from.

This summer will see an opportunity that no lover of things Rusyn should miss.  From June 10 - July 1, 2012, the Institute for Rusyn Language and Culture at Prešov University, Slovakia, will host its third annual Studium Carpato-Ruthenorum.

In the mornings Carpatho-Rusyn history will be taught in Rusyn and English by internationally-recognized authorities like Prof. Paul Robert Magoci of the University of Toronto.

Rusyn language classes will be held after lunch.  The instructors will be faculty members of Prešov University and  Wright State University.  Classes will be conducted in the Rusyn tongue.

Following these sessions, students will enjoy numerous excursions into Rusyn culture.  They will observe wax-resist egg decorating, learn folk songs and absorb Rusyn folklore. Field trips are planned to the Warhol Museum in Medzilaborce and the Svidnik Open Air Museum.  Class members will visit Stara Lubovna Castle and several wooden churches which are designated UNESCO world heritage sites.  They will even get to float down the Dunajec River on a raft.

Space is limited and time is short.  For further information and an application, please visit our website at www.c-rs.org.

Posted by Maryann at 4:37 PM No comments: