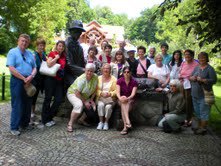 A few years ago, Lisa Alzo gave a presentation on her book Slovak Pittsburgh at the Slovak Embassy in Washington DC.  She was asked to recommend tour possibilities for visiting Slovakia.  "That's easy," she said, "the most informative and fun tours are those given by C-RS." 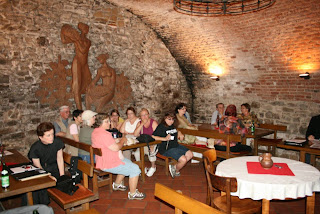 As a veteran of C-RS Heritage Tour XI (July 10-20 2012), I can agree with Lisa.  I and the 22 other participants from Pennsylvania, Ohio, Michigan, New Jersey, North Carolina, and the District of Columbia received a sampling of Rusyn life in the three countries which compose the "Staryj Kraj" that was both entertaining and sobering.  Our journey began at the Hotel Dukla in Prešov where enjoyed dinner and a performance by the Slovak dance troupe, "Šarišan."  The next day we visited the Rusyn Icon Museum in Bardejov, known as  the best repository of authentic Rusyn iconography.  Bardejov is also the home of a 12th Century Gothic church.   We also took in the Outdoor Museum, observing Rusyn village life in the 19th Century including one of several wooden churches. We later stopped at the the Krasny Brod Monastery , a sacred site fro Rusyns since pagan times.  At the end of the day we "took over" a Slovak korčma (pub).  The proprietress and her son did not seem to mind.

On a day set aside to visit ancestral villages, were were driven to Matysova, a town now largely depopulated and little more than a collection of "weekend get away" homes. One of my fellow travelers was delighted (and moved) to discover that the grave of one of his relatives was still being cared for in cemetery that was largely overrun by weeds.   The former wooden church (St. Michael's) was moved to another outdoor museum in Stará L'ubovňa.  I can only describe the interior of that church as ..well, magical...featuring authentic Rusyn iconography influenced by the nearby iconography school of Muszyna, Poland.

En route to Poland, we stopped at the village of Jarabina, birthplace of Michael Strank, one of the US Marines who raised the Stars and Stripes  atop  Mt. Surabachi in Iwo Jima.  Jarabina was part of the agricultural commune Polana during the Communist era and a huge mural remains in the community dining hall as a reminder, perhaps,  of the way things used to be.  Jarabina was the home village of numerous Rusyn settlers in northern New Jersey and metro New York.  A photo of St. Nicholas Carpatho-Russian Orthodox Church in New York City  hangs in the town's community center.

While in the Polish resort town of Krynica, we met the incomparable Petro Trochanovsky, (born 1947) was born in Silesia in the southwestern part of Poland to Lemko parents from Binczarowa. He is the editor of Besida, published in Krynica since 1989. He is a spokesperson for the Lemkos  in Poland and internationally known.  Some call him the Lemko Chaucer but I think he looks like Mark Twain. He is also the choir director at St. Vladimir's Orthodox Church.  He lent his voice to the folks songs "performed" at the Vatra that evening. We also visited the grave and museum of  Nikifor (1895- 1968) (also known as Nikifor Krynicki and Epifan Drovniak) was a naïve painter of Lemko descent. Nikifor painted over 40,000 pictures - on sheets of paper, pages of notebooks, cigarette cartons, and even on scraps of paper glued together. The topics of his art include self-portraits and panoramas of Krynica, with its spas and Orthodox and Catholic churches. Underestimated for most of his life, in his later life, he became famous as a primitivist painter. Somehow, Nikifor's works seem more intrinsically Rusyn than those of the Great Warhol. Krynica has numerous wooden Lemko churches nearby; sadly, because of Akcja Wisła, most are either used by Roman Catholic Poles or have become museums.  During our last night in Krynica, we enjoyed the Vatra at Nikifor Hotel. Some serious singing and moderate consumption of Piwo Okocim (or was it the other way around?) ensued.

On to Užhorod...but first a 2.5 hour stop at the Slovak-Ukrainian frontier and the Ukrainian border police inspected every (repeat every) bag--big or small.  Ukrainian harassment of C-RS?  No, simply breathtakingly bad timing on our part: we arrived while a high level ministry inspection was underway and we gave the border patrol staff  an opportunity to overachieve--at our expense-- in their inspection duties.  I thought the Užhorod Hotel was elegant when I last stayed there in 2008.  It is even more so, now with some added outdoor dining and lounge capacity.  The city itself had also changed: it is cleaner, measurably more prosperous, with more upscale shops and the well-dressed patrons to go with it.  It was also more Ukrainian: Ukrainian flags were everywhere, a message perhaps to those who have  separatist visions for Transcarpathia.  I was struck by the lack of Rusyn-language publications.  Newspapers  and periodicals such as Blahovisnyk, the organ of the Greek Catholic diocese of Mukačevo, were in either Ukrainian or Russian.  John Righetti says that that is because there is not yet an agreed upon literary standard for Transcarpathian Rusyns.  By contrast, the organ of the Orthodox Church of Poland,Orthodoxia, is published in Belarusian, Polish, Russians and Lemko dialect. The church's annual Kalendar is published entirely in dialect.  We were able to  visit St. Ann's Church ("The Rotunda"), Užhorod, the oldest church in Transcarpathia, parts of which date from the 13th Century. The church appears to be used by both Greek Catholic Rusyns and Slovak RCs .

We spent a morning at , St. Nicholas Monastery, Cheneča Hora ("Monk's Mountain"), Mukachevo. Before the cathedral church and other eparchial institutions were established in Užorod, it was at the St. Nicholas Monastery, that the bishop of Mukačevo resided and from where he guided the Ruyn Greek Catholic Church. The monastery and the See of Mukačevo are very ancient. Some say that it dates back to the times of St. Methodius. Even after the center of ecclesiastical life was transferred to the larger and more cosmopolitan city of Uzhorod, the monastery continued to play an integral role in religious life. There were "odpusty" or pilgrimages held at the monastery on every major feast of the Mother of God, the largest and most heavily attended one being that for the occasion of the feast of the Dormition, on August 28. The monastery was turned over to the Orthodox in the 1940s and now used by Orthodox nuns.

Our last day was spent at the gem known as Košice, Slovakia's second largest city. Under its mayor Rudolf Schuster (1983–1986 and 1994–1999) the city underwent a major transformation.  It is the site of a major joint venture with US Steel and has some of the loveliest  Art Deco architecture in Slovakia.

(Written by:  John Schweich, C-RS Trustee)
Posted by Maryann at 6:09 AM


fantastic post and Thanks for sharing this info. It's very helpful.
heritage hotel in jaipurumsmor