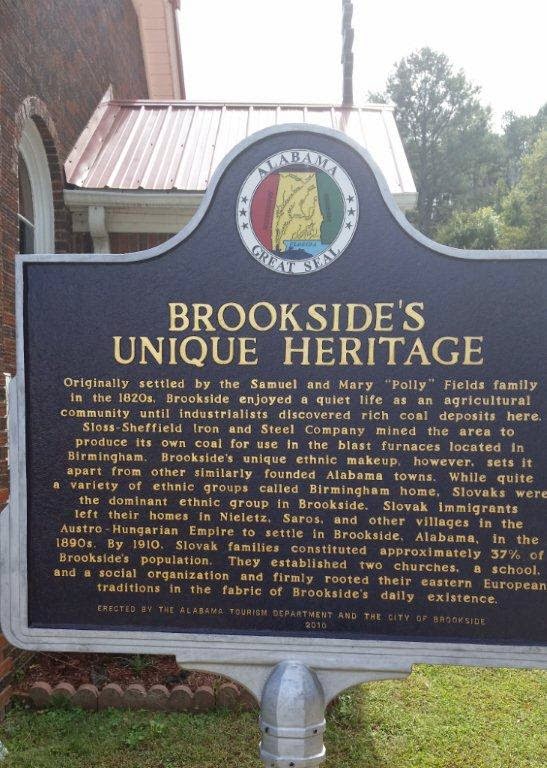 When they arrived in the United States in the late 19th Century, Capatho–Rusyns and Slovaks had much in common: they often hailed from the same or neighboring villages in what was then Upper Hungary, spoke mutually intelligible Slavic dialects, and came from largely agrarian occupational backgrounds.  The great majority found work in the steel mills, coalmines and manufacturing plants of the Northeast.  (1) 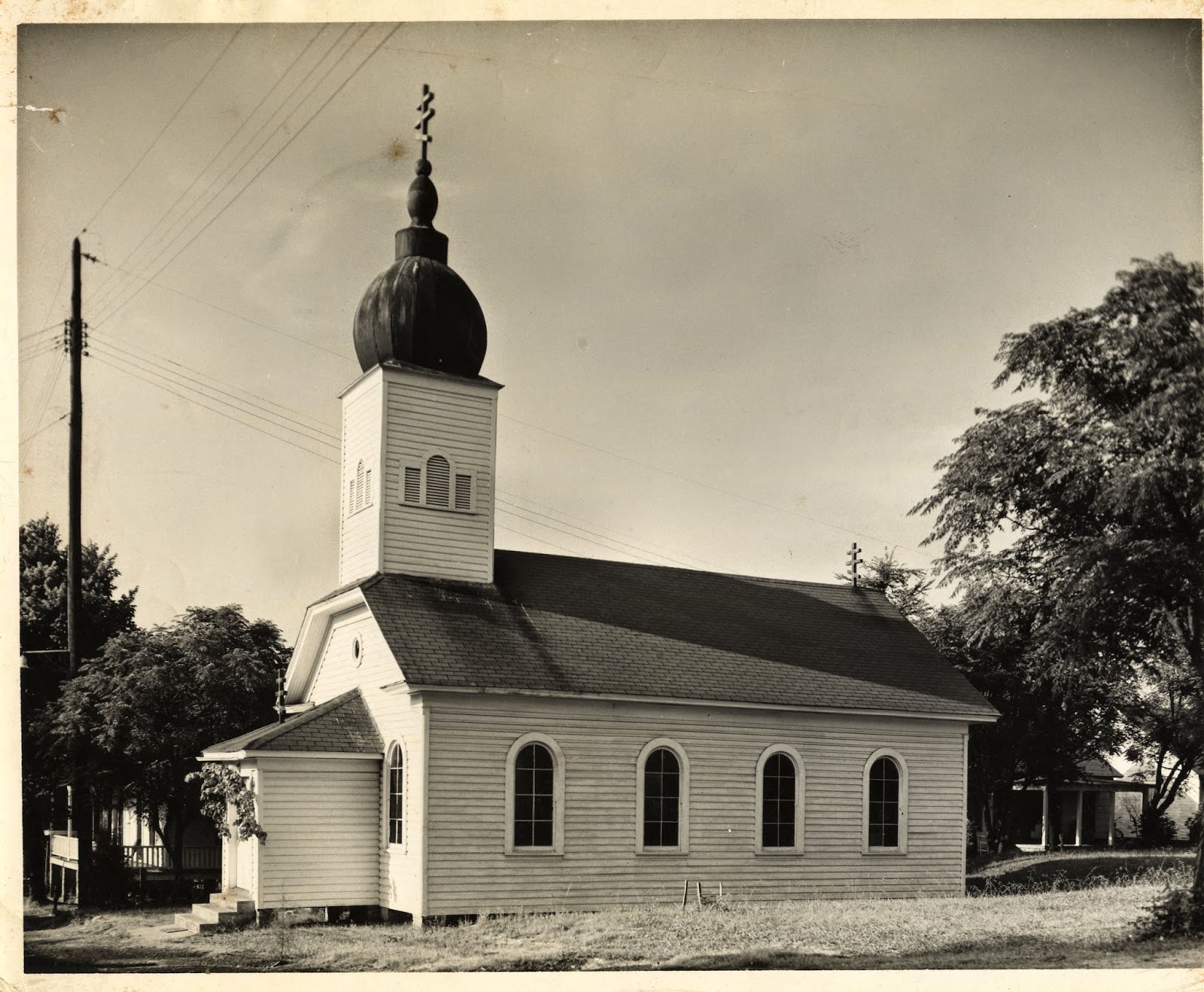 For those of who came from the village of Slovinky (in Spišská nova Ves in present-day eastern Slovakia), many were able to find employment in a field that was very familiar to them: mining.  Slovinky had an extensive network of silver, copper and iron ore mines dating from the 1700s.  By the 19th Century, only iron ore was being actively extracted. The Greek Catholic parish of St. George dates from 1680 and according to the Slovak census of 2001, the village had a population of 1,867, with the following religious composition:  807 Orthodox, 490 Greek Catholics, 429 Roman Catholics and 6 Lutherans.   (2) 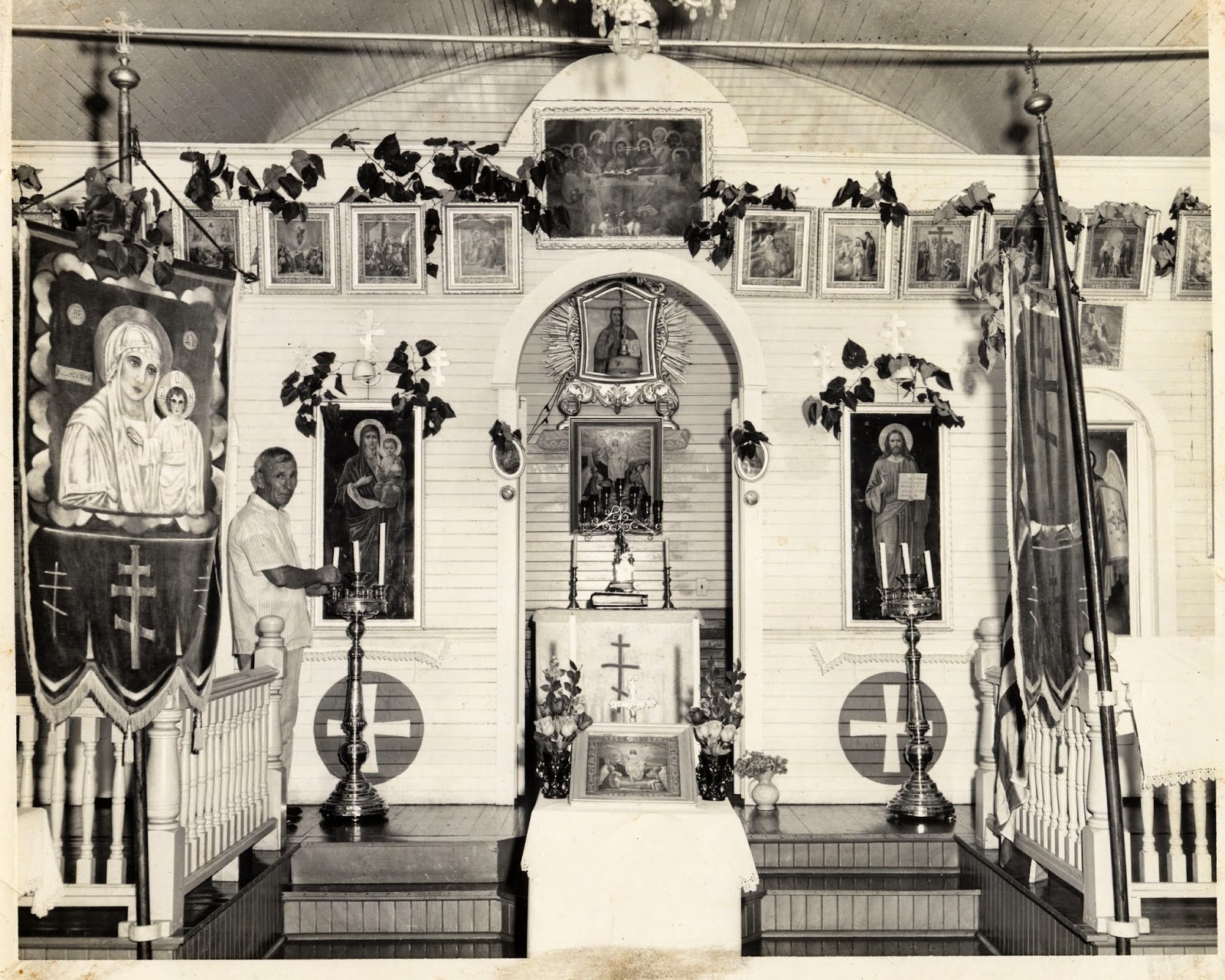 Not surprisingly, many newcomers from Slovinky quickly found work in the bituminous coal field of Southern Ohio, settling in Pleasant City, Trail Run and Byesville Ohio.  (3) In the case of another group of former Slovinky miners, it can be said that work found them and in the process created the oldest and most improbable Slavic immigrant community in the Deep South, Brookside in north central Alabama near Birmingham.

In 1887 The Sloss Iron and Steel Company purchased mine acreage to supply coke to the blast furnaces of the expanding steel mills of Birmingham. Because locals were reluctant to accept mining positions, a decision was made to recruit Slovaks; among first arrivals was John Bensko, subsequently, first Slovak Mayor of Brookside (4) 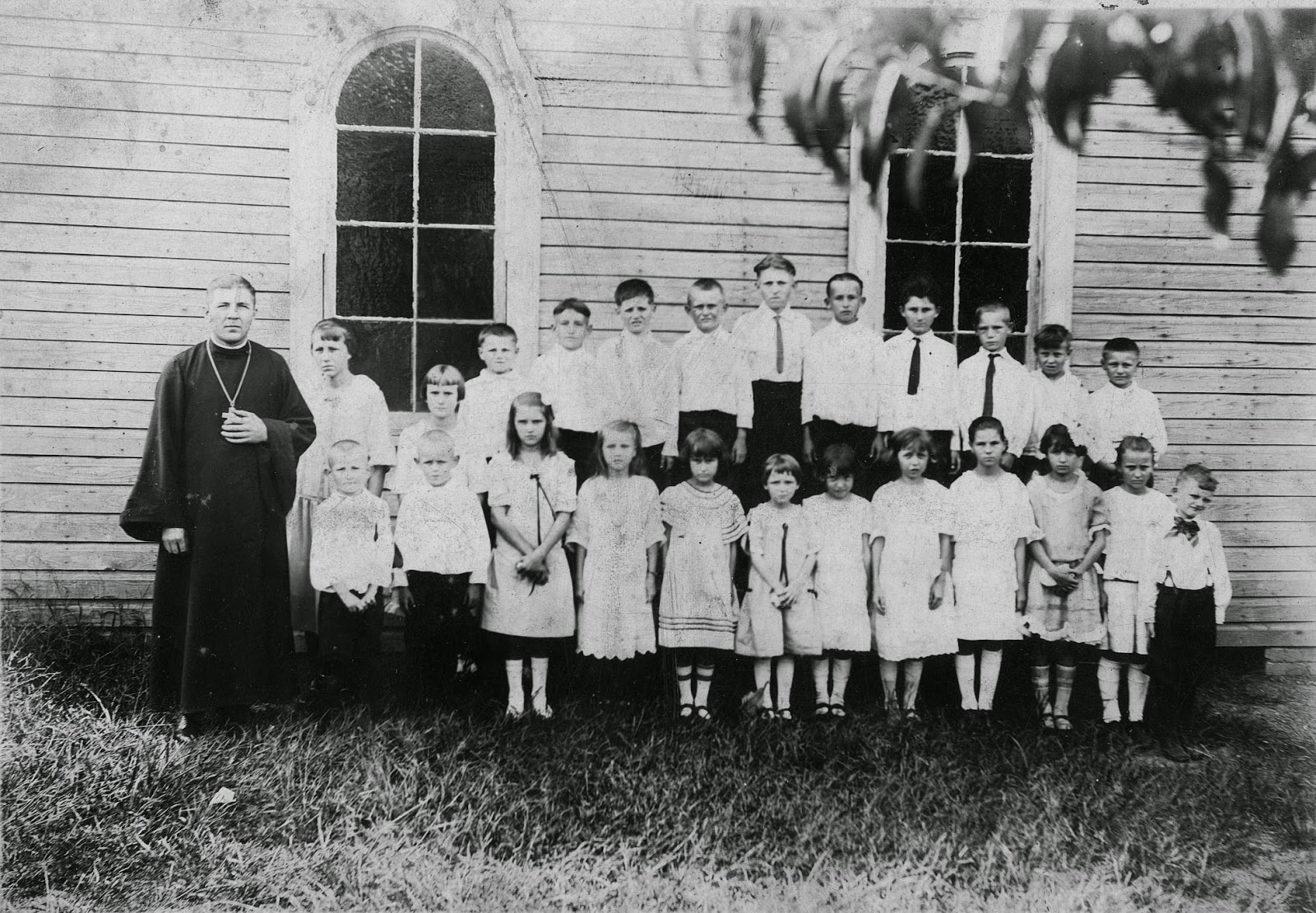 Although articles about the community often describe the early Slavic settlers there as “Slovaks,” it is clear that the arrivals consisted of both Slovaks and Carpatho-Rusyns. The new arrivals reflected the religious preferences of their home village:  An Orthodox Church was founded in 1894; a Slovak Roman Catholic Church, SS. Cyril and Methodius’ was established in 1895.  The later church ran a parochial school that was open to all, regardless of their religious or ethnic backgrounds.  The school closed in the 1930s.  Some of the pioneering members of the parish were Joseph and Matthew Slovensky; Louis Perunko; John and Alexander Slovensky (cousins of Joseph and Matthew Slovensky); Joseph Bakosh; Mike Pator; John Mikolay; John Sikora; Peter Patchen; Mike Perish; the Duchock brothers, John, Joseph and Kiser.

SS. Cyril and Methodius’ Church was served by priests of the Benedictine Order.  Land for the church was purchased from Joseph and Mary Slovensky.   The first resident pastor was Robert Reitmeier, a Slovak speaker. At the time of it founding, the majority of the Brookside’s population (800 families) were Roman Catholics.  The first marriage recorded was that of Mary Perunko and Joseph Slovensky in June 1896.  The first baptism was that of
Valentine Billetz, son of Mrs. and Mrs. Joseph Billetz A school was established and staffed by Benedictine nuns.  During its first year it had 182 students.  The parish numbered among its members small number of Italians, Germans and French.  In 1906, according to the history of a neighboring parish, some of the congregation left to organize a Greek Catholic Church; unable to secure a priest, they obtained the services of an Orthodox priest.  That departure coupled with the strikes of 1908 and 1920 had the eventual effect of causing the congregation to dwindle over the years.  By 1935, the parish consisted of 30 families. In 1936, the school was closed. In 1954, after a period of physical decline, the church was torn down. A new church was constructed in 1955 and dedicated to St. Michael. The Cemetery on “Tiger Hill,” which dates from 1901 served Catholics and Orthodox; the climb was so steep that pall pallbearers had to work shifts transporting coffins up the hill. (5) 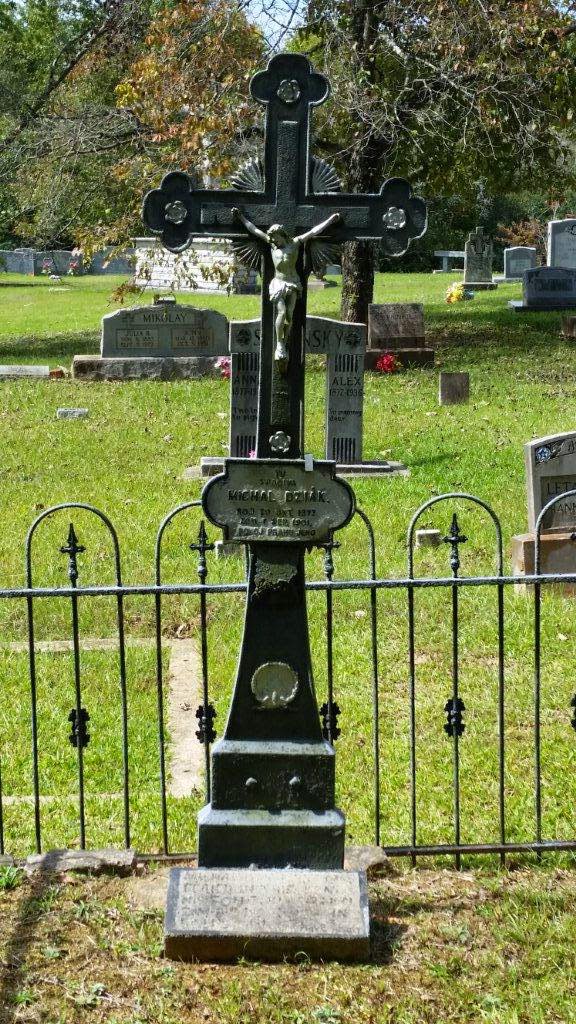 The oldest fraternal organization among Carpatho-Rusyns was the Greek Catholic Union (GCU), founded in Wilkes-Barre PA in 1892.  It saw itself as the protector of the spiritual and ethnic heritage of Carpatho-Rusyn Greek Catholics.  It provided death benefits to its members, whose hazardous occupations made them uninsurable by mainstream insurance companies. The GCU’s newspaper, the Amerikansky Russky Viestnik (ARV), was an influential source of information and opinion.  The ARV was published in two editions:  One, called the "Russian" version, written in Cyrillic (featuring a mixture of Russian and Rusyn dialect) and the "Slavish" edition (in an east Slovak dialect, using the Latin alphabet).  The ARV published several articles dealing with the Rusyn community in Brookside.

One (March 5, 1907) was written by President of GCU Lodge 187, John Skurka.  Skurka reported that the local lodge, consisting of Rusyns and Slovaks, was flourishing and had 79 members.  The other lodge officers were John Slovensky, Mike Pastor, and Andro Hric.  Each of the lodge members had pledged to donate $25-$30 to purchase a lot for the church which was not yet built.  The local coal company had donated a lot but it was insufficient to support a church building.  The workers were earning $2.50-3.00 a day working in the mines.  The miners had recently been on strike for 27 months but the walkout had failed to achieve its demands.  The workers were being paid 57- 62.5 cents a ton of coal.  (6) 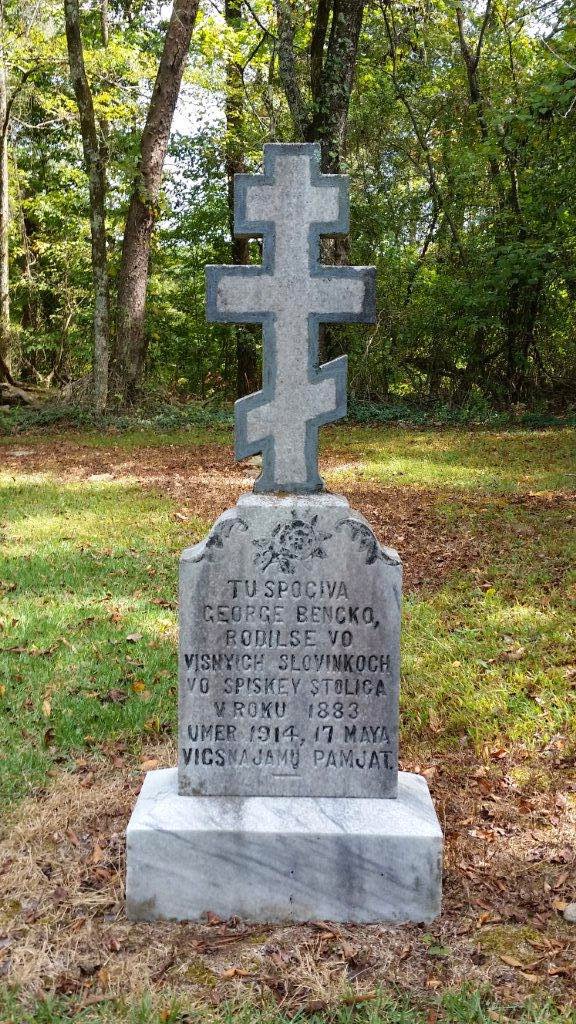 Still another ARV article, (August 27, 1907) written by Ando Varholik, Lodge Treasurer, requested donations for the construction of a church.  The other lodge officers at that point were Peter Bencko (President), Michael Baratka (Recording Secretary) and John Slovensky (Financial Secretary). (7)

At some point, Brookside’s Greek Catholics began to be served by Orthodox priests. (8)
That posed a problem for the GCU, which required that its members be Catholics in good standing to remain members.
Another ARV article, dated 29 April 1909 contained a warning from John Uhrin, President of the GCU, quoting the society's Statute #65, i.e. that GCU members of who became Orthodox would lose their membership. The warning specifically cited Lodge 187 of Brookside AL. (9)

Joseph Slovensky had written another article in the May 25, 1911 ARV reporting a liturgy held at SS. Cyril and Methodius Slovak Roman Catholic Church in Brookside on May 3, 1911.  The celebrant was Fr. Michael Jackovič, the Spiritual advisor of he GCU from Scranton. In his sermon, he warned
that members of Lodge 187 who had embraced Orthodoxy, would be expelled from the organization unless they returned to Catholicism.  Slovensky reported that many "schismatics" (i.e., Orthodox) attended he service, heard the sermon and returned to the Catholic Church.  (10)

Over time, the connections between the Brookside Slavs and their confreres from Slovinky in Southeastern Ohio took on a new dimension. Many of the miners in Pleasant City and neighboring Trail Run OH were, like their counterparts in Brookside, natives of Slovinky village.  Those old country village ties persisted and a network developed, allowing each to respond to the need for miners in both communities. After a particularly painful strike in Brookside, many of the miners relocated to Ohio, in search of stable employment opportunities. The Brookside arrivals also brought with them their newly adopted Orthodox faith which posed conflicts in the Trail Run's St. Michael's Church, originally founded by Greek Catholics but now served by Fr. A. Solyanka, an Orthodox priest who previously resided in Brookside. The ownership of the church was decided in the courts, which ruled that St. Michael's was an Orthodox church.  (Fr. Solyanka is mentioned in the St. Nicholas’ centennial history as having served in Brookside in 1911.  (11)

On January 31, 1977 Steven F, Slovensky was interviewed as part of the University of Alabama Oral History Project.  Slovensky was born in Brookside in 1897 and remained there until 1920.  He was the nephew of Joseph Slovensky who was a member of the local GCU Lodge. His father was born in Slovinky and lived for a time in Pennsylvania before relocating to Brookside.  Slavic immigration to Brookside was at its height from the mid-1890s to 1908.
His parents were married in SS. Cyril and Methodius’ Slovak RC Church in Brookside, the first wedding performed in the church.  He advised that at the time he left the town for employment opportunities elsewhere, the average family earned about $25.00.  Neighboring towns included Pinckney, Daisy City, Cardiff, Gin Town and Blossburg. Most of the “Slovaks”, as he called them, resided in Brookside. The congregation of SS. Cyril and Methodius’ numbered 200-300.

A major source of recreation was baseball; Fred E. "Dixie" Walker (1910 – 1982) who subsequently played for the New York Yankees, Brooklyn Dodgers, Pittsburgh Pirates, Chicago White Sox and the Detroit Tigers played in the local "Miners League," of which Brookside was a member. (12)

The conversion of the Brookside community to Orthodoxy, along with 19 other parishes, was cited in an August 31, 1911 letter to the Pope from 42 Greek Catholic priests as a result of the poor leadership of the Greek Catholic Bishop, at the time, Soter Ortynsky. During his tenure (1907-1916) Ortynsky was opposed by pro-Hungarian and anti-Ukrainian elements of the clergy. (13) 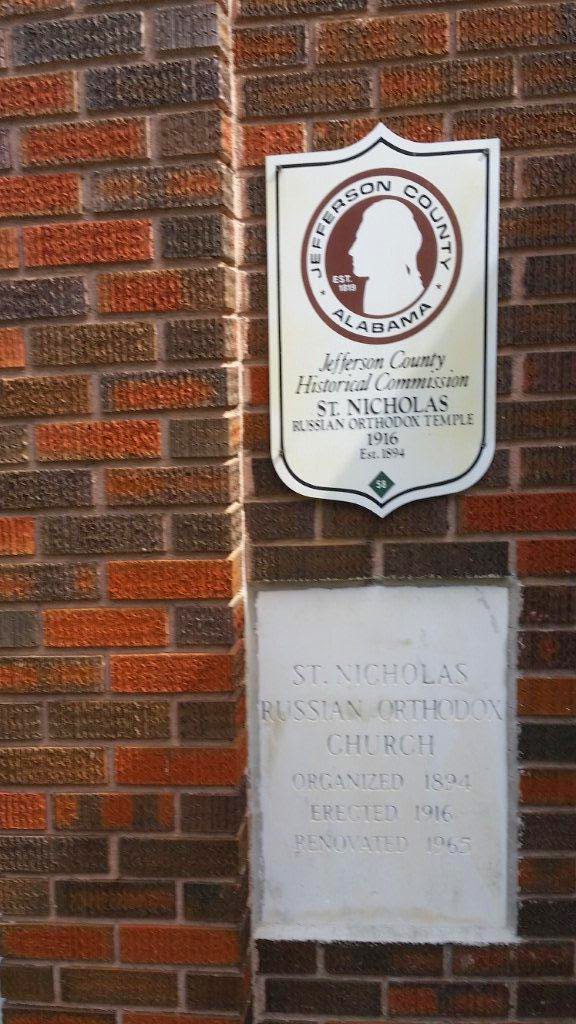 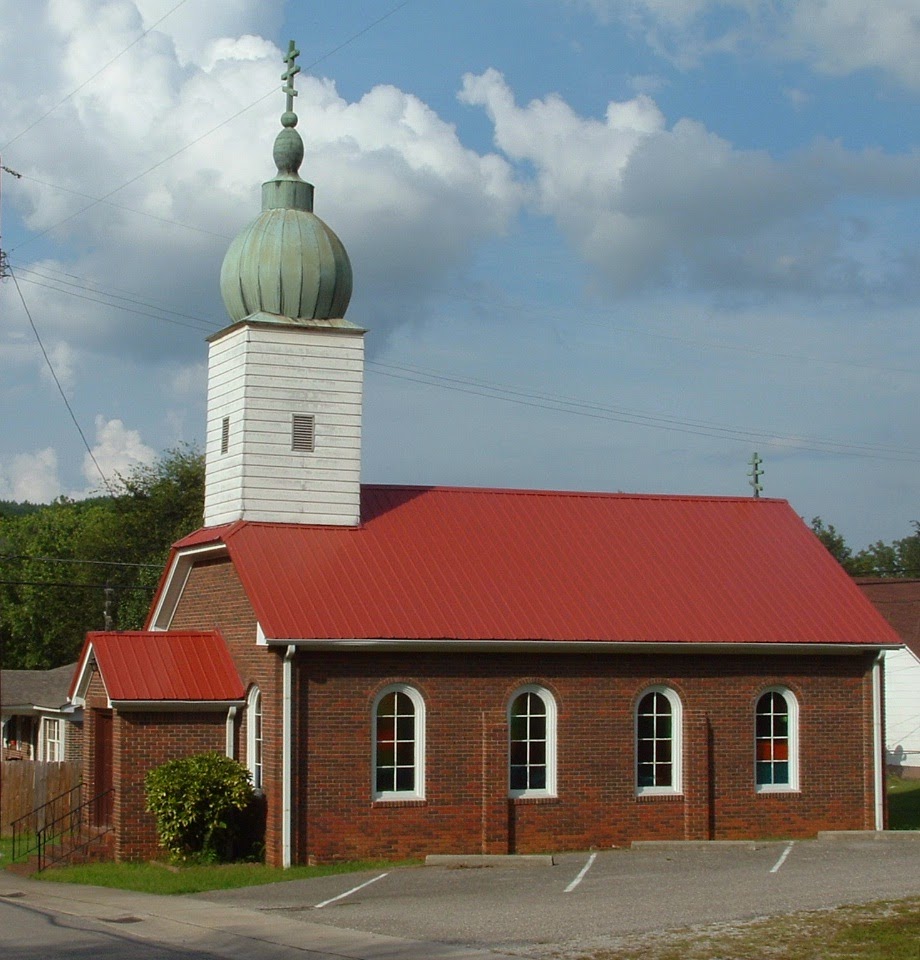 St Nicholas’ Russian Orthodox Church remains the only spiritual vestige of Brookside’s Slavic beginnings.  Because of a fire there is no record of baptisms and priests assigned prior to 1911. The original church dedicated to St. George, was destroyed by a tornado.  A second church was named Protection of the Mother of God burned down.  The current structure, named in honor of St. Nicholas, constructed in 1916, was renovated in 1965.  Brookside immigrants maintained contacts with their counterparts around Pleasant City Ohio who also traced to their origins to Slovinky.   During the 1930s and '40s,mining activity gradually ceased in Brookside and most of the original Slavs moved away permanently. Fr. Benedict Tallant, the current pastor of St. Nicholas’, is 87 years old, is of Irish descent and a convert to Orthodoxy. He was ordained in 1962 by Bishop Dositheus of the Russian Orthodox Church (Moscow Patriarchate).  He was assigned to St. Nicholas' in Brookside in that year, assisting Archpriest Eugene Brown of the Russian Metropolia (today’s Orthodox Church in America).  In 1965, Fr. Benedict became pastor and petitioned that the church be admitted into the Russian Patriarchal jurisdiction.  At that point the membership was in excess of 100 people and is currently slightly less so. The average attendance at Sunday Liturgy is about 35.  In the early years of his pastorate, Fr. Benedict transitioned the parish from the exclusive use of Church Slavonic, reducing it to once a month and currently all the services are conducted in English.  Over time, the choir replaced congregational singing. Fully half of the current membership is composed of converts.  Several ethnic Russians from the nearby University of Alabama at Birmingham are members. The church’s Sisterhood of St. Olga continues to host “Annual Russian/Slavic Food Festival,” during the first weekend of November, which attracts visitors from as far away as Virginia. (14)